She is the Lady of the Manor of Cattleya's Mansion, with her servants, Oncidium & Cymbidium. She is also Oncidium's playmate. 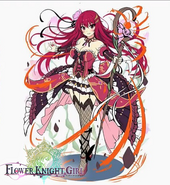 "Early Childhood" Skin
Add a photo to this gallery

カトレア / Cattleya is a genus of orchids originating from Central and South America that has been discovered at the beginning of 19th century. [2] [3]

The genus was named after a British botanist William Cattley who was the first one to successfully grow a Cattleya specimen, Cattleya labiata to be exact, which was previously unknown to world. [2] [3] [4]

Thanks to its large, beautiful flowers as well as enormous diversity within its species Cattleya is also know as the Queen of Orchids. [2] [5]

Cattleya is a part of so called "4 ocean breeds" (四大洋ラン) alongside Paphiopedilum, Dendrobium and Cymbidium. [2] [5] [6]

四大洋ラン refers to 4 most famous orchid genera that were introduced to Japan from the Europe. It does not refer to genera "produced in the West" but to those that "came over from the West". This term only applies in Japan. [6]

Corsage is a small floral decoration that is worn on wrist or pinned to dress.

Retrieved from "https://flowerknight.fandom.com/wiki/Cattleya?oldid=78390"
Community content is available under CC-BY-SA unless otherwise noted.