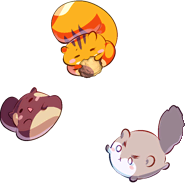 Colchicum's Animal Companions
Add a photo to this gallery

コルチカム is an alias used when referring to a イヌサフラン属 / genus Colchicum. [1]

Colchicum is a genus of about 160 toxic perennial flowering plants, native to West Asia, Europe, and parts of Mediterranean coast. Common names of many of its species such as Autumn Crocus, Meadow Saffron or Naked Lady can also be applied to the whole genus. [2]

Naked Lady refers to the "naked" Crocus-like flowers that emerge in late summer or autumn, long before leaves that appear later in spring. [2] [5]

Despite its common names, lilies from genus Colchicum are not connected to irises from genus Crocus, they just look similar. One of the most noticeable differences between these 2 genera is that Colchicums have 6 stamens and 3 styles while Crocuses have 3 stamens and 1 style. [2]

Genus name derives from Colchis, a region of today's Georgia. Colchis is mentioned in Greek mythology as the destination of a hero called Jason and his band, Argonauts, in their quest to find Golden Fleece that would allow Jason to take the throne of Iolcus, an ancient Greek city. [2]

All Colchicum plants produce colchicine, a toxic alkaloid. It is used to treat gout (disease that causes swelling and severe joint pain [4]), pericarditis (inflammation of the two, thin layers of a sac-like tissue that surround the heart [3]) and others. Colchicum autumnale contains the most lethal amount of colchicine. [2]

Autumn blooming Colchicum autumnale, despite its toxicity, is commonly cultivated as ornamental plant. Its flowers have 6 tepals, 6 stamens with orange anthers, and 3 white styles. [5]

Retrieved from "https://flowerknight.fandom.com/wiki/Colchicum?oldid=78276"
Community content is available under CC-BY-SA unless otherwise noted.