This article explains the basics and particulars of combat. Combat occurs when you encounter a pest during a Subjugation, initiate a fight against a Raid Boss, run into the Ancient Pest in the Whaleship, and in other scenarios. The outcome of combat is largely determined by each character's Type, Stats, Skill, and Abilities.

All battles are turn based. Either the player's team acts or the enemy's team acts. All battles start with your party's team having the initiative. When all characters have acted, the other side starts their turn.

All characters (and some enemies) will use normal attacks with a chance to activate a Skill instead.

Your party's attacks will make the enemy drop Shine Crystals which will fill the Light Gauge. When the Light Gauge is filled, you can press the Unleash button to activate Solar Drive. The Solar Drive will fire off when the current acting side's turn ends.

Flower Knights and Pests have types. The following types exist.

Having the same type as your enemy lets you hit their weakness. Your attacks will deal 1.5x more damage. Enemies will not deal weakness damage to you. All flower knights and common pests/bosses have one of the first four types. 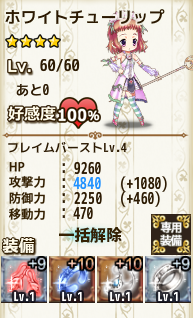 There are three stats that affect the performance of a flower knight during battle: HP, Attack Power (攻撃力), and Defense Power (防御力). There is a fourth stat that is usually only important for Subjugations: Speed (移動力). The combat stats can be increased permanently and cheaply by boosting their affection with Gifts. The stats can also be permanently increased by undergoing Strengthening Synthesis with Ampules. Combat stats can also be increased with the majority of Equipment.

HP is Hit Points. When taking damage, HP is reduced. If HP goes to zero, the character will be knocked out of further battles. If either party's members lose all HP, the surviving team will win. A flower knight that loses all HP will only be gone for the duration of a Subjugation; there is no perma-death. HP is the largest stat in the game, so it strongly suggests the survivability of a flower knight.

Attack Power / 攻撃力, aka Attack, determines how much damage you do with attacks. It is the second largest stat in the game and Attack-affecting abilities are similarly large in numbers compared to other abilities, so Attack strongly determines the usefulness of a character.

Defense Power / 防御力, aka Defense, determines how much damage mitigation you can do. It is the smallest combat stat and has the least bearing on a flower knight's usefulness. Pests tend to have negligible Defense unlike flower knights and Aqua Shadows. High Defense increases your chance to Defend.

Speed / 移動力 determines how far a party moves in one turn during a Subjugation. Speed does not affect combat unless someone has an ability such as speed to attack conversion. A party's speed is simply the average speed of all characters in the party. Managing speed is important for making full clears.

Overall Force / 総合力, also called Total Power, is an estimation of a flower knight's strength. It is calculated as HP + Attack + Defense + Ampule boosts + affection boosts. Equipment does not factor into overall force unless you are looking at your own parties in Whaleship compositions.

Usually, HP restoration is not a big factor in the game because it is not something everyone can do. Moreover, HP is always maxed out when you start a subjugation or RB fight. You don't have to worry about HP outside of fights.

This is a list of methods of HP restoration.

Defending (防御) is a random chance to further reduce damage you take. It is visible by a green shield that pops out when someone takes damage. To date, only flower knights and the Whaleship can Defend. Defending reduces damage by 20%. High Defense increases your chance to Defend, so boosting your Defense through means like Equipment, Ampules, and affection bonuses can subsequently make you Defend more often.

A Skill / スキル is a special attack that your character will randomly use. It will have a damage multiplier which states how much more damage over a normal attack it does. This is the damage you can expect no matter how many damage numbers appear as the attack grinds the enemies.

You can see what types of skills characters have from the Comprehensive Knight List or by using any of the following categories.

Attacking enemies makes them drop shine crystals which fills the light gauge / 光ゲージ. Anywhere between 100% and 300%, you can activate Solar Drive. If you click the button while abilities are being displayed, Solar Drive will fire before anyone takes the first turn.

The damage formula is something like the following (source: Japanese Wiki).

The helper's overall force is not used in this formula, but that team's abilities that affect Solar Drive multipliers will work if they are fighting.

Crits are calculated on a per-enemy basis, so skills that hit multiple enemies may crit some enemies, but not the rest (see example screenshot).

In the past, skills that hit "all" enemies could not crit at all, but this is no longer a problem. The old circumstance put Lupin in an awkward position since she had a crit rate boosting ability and an "all" targeting skill. Also in the past, crit was unable to stack with weakness damage, so characters either did 1.5x weak damage or 1.5x crit damage but not both.

This info comes directly from the Japanese Wiki.

RNG is between 0.95 ~ 1.05. Everything beyond decimal points are thrown away. The lowest amount of damage is 1.

The exception is that if the skill does not target all enemies, or the skill's damage is based on affection, then after the minimum damage of 1, the skill's multiplier is tacked onto the damage.

Retrieved from "https://flowerknight.fandom.com/wiki/Combat?oldid=44385"
Community content is available under CC-BY-SA unless otherwise noted.