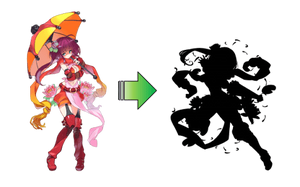 The Evolution / 進化 state, sometimes called Awakening, is one of the earliest stages of evolution. It is the process of going through Evolution Synthesis / 進化合成 to power up your knight.

Like with Blooming, evolution resets their current level to one, but increases their max level. Evolution doubles the stat boost from Affection. Depending on the rarity of the knight, they may learn new ability or improve their existing abilities.

The exception to the above table is Lilac who is a 4* that learns a secondary ability instead of getting her primary ability powered up.

Click the Character button to get to the Character Management screen. Then click on the fourth tab from the left labeled Evolution/Blooming Synthesis / 進化開花合成. to select a flower knight for evolution.

In the Evolution/Blooming Synthesis tab, the game will list all girls that can be evolved or bloomed regardless whether or not they have fulfilled the requirements. Be sure to take advantage of the Sort / Filter options.

Selecting the knight will open a page where the evolution requirements, as well as the pre and post-evolution stats are listed. If you click on the cyan Particulars / 詳細 button, you can also see what abilities change/are gained.

All flower knights can perform the Evolution when the following conditions are met:

Note: There is no requirement for the character's affection to be at any level before evolution.

A flower knight's rarity will determine what consumables are required for her evolution.

Hence, evolving is probably most effective if you can do at least one strengthening synthesis after the evolution. This will only cost 1,000 gold for synthesizing 10 Manyus at once.

Finally, be aware that the maximum level of the flower knights owned by any Comrade in Arms is limited by the highest leveled flower knight you own, so getting the most use out of your friends will require evolving and fully leveling up at least one 5 star or 6 star flower knight. New players should aim for this as one of their first major goals.

Community content is available under CC-BY-SA unless otherwise noted.