I want to start playing. What should I do?

If you live outside of Japan, first see Registration to log in. When you are able to play the game, newbie advice can be found at How to play.

Which button is yes and which is no?

Is there an English version of the game?

Yes, but this Wikia is specifically for the Japanese version of the game. Be aware of a few things.

There is an English localization of the game on Nutaku, but it is over a year behind on updates, has its own promotional Gachas unlike what DMM's version had, some events are out of order, and there's a number of features specific to that version of the game which never existed in the original. Using this Wikia to look up information for the Nutaku version may confuse you rather than help you.

Traversing DMM's site may ask you to translate the page using Google Translate or Bing Translate. This translates the content on DMM's site, but it can't translate the game itself because it's a Flash object. This is a safe action.

When trying to log in to DMM, the site itself may ask you if you want to browse in English or Japanese. Don't choose English because that'll spit you over to the Nutaku side.

What are these seeds on the main screen?

You can send your girl on a search to get gold, stamina and seeds. You regenerate one search every 2 hours.

What are those weird-looking fairies (red lion, blue fairy in dress, green plant one)?

These girls increase the stats of the girls you feed them to permanently.

You can feed up to 100 of the aforementioned fairies to a single girl for a total of additional +3000 health, +1000 attack and +400 defense. These stat bonus carries over through Awakening.

What are the green crystals I get on event maps and quests?

These are Crystal of Life which can be exchanged for fairies, ampules and Kodaibana flowers. The latter is only exchangeable for Crystal of Life, with the rainbow version require 500 of them.

What are the daily event maps?

The daily event maps are listed by the weekdays:

No worries, data is shared between the two versions.

Where do I get more flower stones? I don’t want to buy them.

You get one for fully clearing a map (all bosses and all enemies killed), two for event maps. Daily login rewards also give them out, as well as events. DMM likes to give them out too as an apology gift during emergency maintenance and such, like they do in their other games. It’s fairly easy to get 50 stones for the 10+1 gacha every 2-3 weeks or so.

What is the maximum level attainable by the leader (player)?

You can level up to 250 for a total of 435 maximum stamina. Levels above 120 takes significantly more EXP to level through. Furthermore, the maximum level cap would be increased from time to time.

Where do I get more girls?

At the beginning, use the regular brown gacha seeds to get all the 2*s and 3*s. Save up all your flower stones for the premium gacha for 4* and higher. You can also buy 4* girls in the shop with 150k gold. These girls change every two weeks.

What girls are best to use?

Higher rarity is better unless the character is Alstroemeria (Gratitude Towards The Future). You can clear all important content with 5*s. The 2*s and 3*s are a waste of time and resources. The 4*s with high HP are good for beefing up the Whaleship early on.

Your girls don’t gain experience on maps, you have to use other girls/fairies to level them. Farm fairies on Wednesday (yellow, purple) and Saturday (red, blue) and use them to level girls of the same color. Leveling using regular girls eventually gets very very expensive. For people who are just starting, it is recommended to give Lv1 girls ten other girls at once so it only costs 1000 gold to get them to level 8 or so for a good initial boost. You’ll want to be able to clear the 50 stamina maps for better fairies, working your way up to the 80 stamina one. There are recommended strength levels so that’s a good benchmark.

Where can I get more gold?

Saturday gold map has the best gold ratio, giving you thousands per run. For all other days, farm 4-5 since you’re sure to get 3 girls to sell for 750 per run on top of the gold from the map. If you can handle it, 6-5 can potentially give 4. To save money on leveling girls, always feed ten at a time. Sell your excess 2* girls and just use fairies to level with. There are event maps that give a good gold ratio (usually 40/80 stamina) so if you can do those it might be better.

Awakening is transforming a girl into a stronger form, resetting them to level 1 but increases their base stats. It requires dragons and gold. Dragons can be gotten from daily maps. In addition, the girl needs to be at her level cap. The rarer the girl, the more rare dragons and gold it costs to perform an awakening on her.

Why should I awaken?

Awakening will increase the level cap of the girl, double the bonuses gained from affection, increase base stats, and improve their skill.

How do you gain affection?

Affection can be gained by giving gifts to a girl, if it’s their favorite item the bonus is doubled. The stat boost is significant especially after awakening. You can get gifts by clearing maps, picking up chests in maps or doing the 20/50/80 stamina gift maps that are available every day.

How do I increase skill levels / accessory slots?

Give girls copies of themselves or anyone with the same skill. Accessory slots will unlock every time you feed them the same girl. Skills aren't 100% chance to level up however, and get harder. There are also lotus flowers that you can exchange in the shop for life crystals that have 100% chance.

For event girls you can purchase their representative flower with the currency obtained from the event in the Exchange Shop. These flowers can then be fed to their respective knight girl to either unlock accessory slots or increase skill levels, as well as giving as much base EXP as bronze experience fairies per flower.

Here’s a picture of all possible accessories:http://i.imgur.com/0DyiOo9.jpg

How do I get more accessories?

You need blue seeds to do the accessory gacha. You’ll have to attack and/or kill boss monsters that appear randomly after beating a map to get them. You and your friends may send each other bosses so everyone gets seeds. If you think your friends can kill the boss without you, just send it without attacking (upper left button at attack screen, the one that shows the big monster picture and the three attack buttons) as you still get blue seeds. Sometimes you may encounter a blue mantis that gives at least 600 seeds! Ch9+ bosses drop a different kind of seed (light blue) that gives better accessories.

Level up your girls, unlock teams (if you haven’t) and get better girls. Free gacha can only give 4* maximum, so save up all those free flower stones for the 10+1 premium gacha.

I can clear the map but not fully clear it, my girls go to random places!

It can be frustrating, yes, but you just pray and hope they go along the right path. Unlocking all the teams help a lot. Tip: You can shuffle around your team starting positions by clicking and dragging them around the map before doing anything else. This is how you perfect clear 5-3.

How do I do the current event?

Why should I aim for more than just the event girl?

Active events have more spoils than just the event girls and their arrangement flowers. They often have useful items such as fairies, ampules and event-exclusive equipment.

I started late and missed so many event girls...

What happens if I run out of space for characters?

The popup shown above will appear. All of your characters will be intact (you can own characters over your limit), but you won't be able to do subjugations. In order to reduce the number of characters you own, it gives you the following options from left-to-right.

Why are there two event characters?

Starting with event 87, the devs intended to start giving players the event character at 99% affection. This means new players could quickly get strong 5*s and not need to hoard gifts before seeing their R-18 scenes. Unfortunately, a bug caused some people to accidentally get a 0% affection event girl instead. To make things equal, they made it so that everyone got both a 0% and 99% one. But this fix took place in the middle of the following event, and the same bug happened in that one too. So they had to apply the fix for both characters. Ever since then, they've just been handing out a 0% and 99% event girl for no particular reason other than "we had to do it the first two times".

Players should raise the 99% affection one and do whatever they want with the 0% affection one. For players who are strong enough to obtain all the skill and equipment flowers necessary to full spec the event girl, they can sell the spare 0% affection one or keep it for Garden antics. For players who can't get all the flowers, they should do Strengthening Synthesis immediately with the 99% one as the base, and the 0% one as the material. So long as you did not use the skill flowers, this will maximize your chance of increasing the 99% affection girl's skill level by 1. Remember that you will get the bond crystals regardless of whether you sell or use the spare character in synthesis.

Why can’t I play the game?

DMM only allows Japan-based players to play their game, so you need to be in Japan or fool the server into thinking you’re in Japan, via proxies or cookies. The R18 version doesn't require you to have a Japanese IP address or even just the right cookies, but you do have to disable your ad blocker if you use one. In other words, playing the R18 version requires less effort than playing the safe version. See Registration.

All I see is a woman and text. 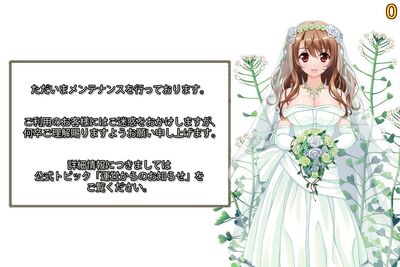 If you see a screen like the screenshot above, the game is undergoing maintenance right now. It could be the regularly scheduled maintenance or an emergency maintenance. Wait a while for the game to come back online. Feel free to kill time by fondling Nazuna's breasts.

A message appeared and I can't continue playing the game.

If it was the message in the screenshot, that is a communication error. It asks if you want to retry.

はい / Yes, will retry connecting. With a bad Internet connection, this may loop back to the same error though.

いいえ / No, sends you back to the main screen and not lose any stamina.

A message keeps appearing before subjugations and raid boss fights

If it was this message, this is the warning that the regularly scheduled maintenance at 4 AM Japan time is about to occur. It warns you that your progress may not be saved if you start something before 4 AM and complete it after 4 AM. Expect to lose your stamina and earn nothing from a subjugation.

A similar message exists for other maintenances which aren't scheduled. It gives the same warning, but won't mention 4 AM.

A message appeared and then the game restarted

You may have seen this popup. It says that your session ended and the game will restart. This means that your Internet connection went out at some point in time.

Retrieved from "https://flowerknight.fandom.com/wiki/FAQ?oldid=82815"
Community content is available under CC-BY-SA unless otherwise noted.