This article focuses on the ins-and-outs of real money used for FKG. Money can go into FKG by buying DMM points, but it's a one-way transaction. DMM points can be bought in the following ways:

DMM points are used to buy Premium Gacha rolls, Gardener Requests, and flower stones. Buying DMM points is called charging / 課金. You can check how many points you have with the text labeled Confirm Possessed Points / 所持ポイントを確認. DMM points expire one year after buying them. To charge points, look above the game's app and click on the button labeled Point Charge / ポイントチャージ. 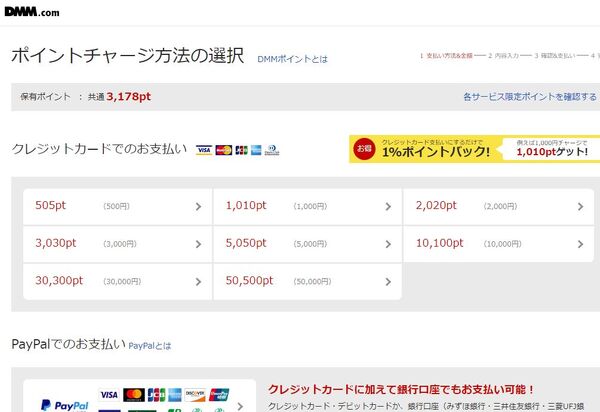 You will be taken to a screen where you select how to charge for points. The methods are as follows:

Using a credit card has different repercussions than the other methods.

For the Mobile Version on Google Play, you can use your Google Play account's money to charge. The process resembles Paypal in that a conversion from your local currency to yen will be done.

Probably the same as Android.

Above all else, FS are required to roll Gacha which is how you'll get your most powerful characters. Worded differently, you cannot get the gacha girl you want without spending FS at some point in time.

FS will always be in multiples of 100. That means the smallest amount you'll ever see is 100. Because the numbers get large and the first two digits are meaningless, multiple ways to refer to FS amounts exist:

Regarding why the FS are multiplied, it was part of FKG's preparation to unveil the Mobile Versions. In the past, the smallest number of FS you could ever see was one, but they changed the smallest common denominator to 100 so that 1 FS = 1 yen. This meant that foreign currencies could buy FS with minimal loss due to rounding. For example, you could buy 100 FS for the price of 100 yen using your local currency which would be like 0.94 USD. Prior to the change, it would've costed 0.00(94) USD... meaning free.

FKG differentiates between bought and free FS. Bought FS / 有償 can only be obtained by trading DMM points for them. They expire in 180 days. Free FS / 無償 are obtained in-game. Free FS are also a bonus if you buy FS with DMM points in big batches. See Shop.

Here are some ways to get FS in-game.

Prioritizing full clears are vital to FS income because Current Events and Reprint Events only last two weeks each, so you can only get the FS from their stages during that time. When events come back as reprint or re-reprint events, they count as brand new stages, so the full clear rewards are different.

Retrieved from "https://flowerknight.fandom.com/wiki/Real_Money?oldid=87760"
Community content is available under CC-BY-SA unless otherwise noted.