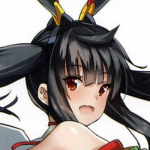 Once a totally useless and unlucky player round early release just like some others whose probably already quit the game, either because of 'not their cup of tea', bored, or rage.
My team usually focuses on [Enemy Sweeping] and [Move Speed] instead of Abilities syncing or combos, this also applied to my [Support team].
Nutaku? I am sorry, I am a groupie with anti-nutaku.

History & The Knights of Memorial

These are the knights who's under my commands that struggles the hardships and moments during my newbie times. I am not remembering when I started this game, but I am sure it like several days or a week after the game release on DMM. Hibiscus as the free given first knight, and then Silver Orchid who've supported my entire squad ever since.

My first ever 5★ is Tachibana, but even back then, I am unable to uncap her full potential(Slots & Skill). After that, I tried to get Canna(Got but not in full potential), while having no other 5★ besides Tachibana. Such a hard time, because of that I barely logged in and only do events for Event Characters I am interested to get. Even then, I failed to get most of them...

Ah, that's right. Back then players have to actually Exchange the Event Knights(without affection bonus) for a huge amount of points, similar to the revamped ones. Unlike these days, where you can get them(with 99% affection bonus) by just clearing stage one on the first phase missions.

Barely able to move further, I took a long hiatus. I don't remember when exactly I come back, but I remember the game had quite a campaign by that time. Getting quite a lot of Flower Stones, Manyus, Dragon(flies), and Golds, kind of fires me up and used them to level every girls I had, my luck however still the same. But at least, I finally can reach stage 4 on the first period of event missions.

Remembering that I missed Rena's release period, I decided to get her first to her full potential. It's it still quite hard, the friends on the list are pretty much no longer playing, while those who keep playing while I am on hiatus already removed me from their list.

But I did it, I got manage to get her to her full potential. And thanks to her after that, everything else doesn't seems to be a problem very much. I even managed to get some 5★ Gacha knights too, if I recalled correctly, it was Fire Lily and Toad Lily. And that history is what makes my account these days, I won't brag, but I know I am proud of it for now.

Oukami: "This is my wishlist, where the Greed Sensor keep ntr-play me up."

Rena: "Ah! You're thinking on looking for another girl are you?"


Oukami: (Which sometimes I can't stop thinking that Rena was and is the one who's behind it...)

Retrieved from "https://flowerknight.fandom.com/wiki/User:Oukamihalf?oldid=83126"
Community content is available under CC-BY-SA unless otherwise noted.