Warrior of the Heart, Paint With Love / 武の心、愛に染めて is event number 133. As the featured event, it was a Treasure Rally event.

The ???[Edit] series of limited edition Equipment such as ???[Edit] Ring (刀鍔の指輪) were introduced. 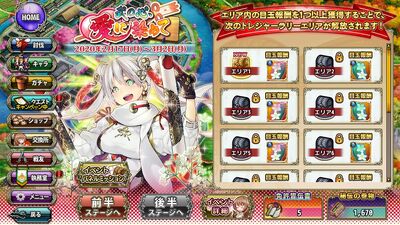 The event screen can be accessed from the banner on the Home Screen or the banner in the Special tab for Subjugations.

To learn more about this type of event, see Treasure Rally.

In this event, movement currency makes characters move ahead four panels without having to rely on luck from Nazupon.

The following quests are available during the featured event period. The conditions are only clearable by participating in this event's dungeon. 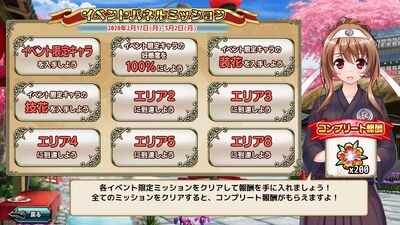 These special quests are available for during the featured event period. EC is short for Event Character.

These Secret Gardens appear in place of normal SGs.

When you beat the Top Class stage of either phase of the event, a Challenge Dungeon is unlocked. You can only complete them only once.

Retrieved from "https://flowerknight.fandom.com/wiki/Warrior_of_the_Heart,_Paint_With_Love?oldid=115808"
Community content is available under CC-BY-SA unless otherwise noted.