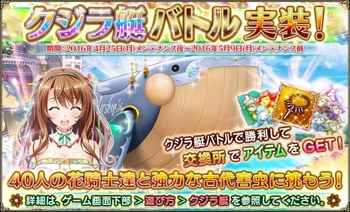 The whaleship / クジラ艇 was implemented on 25 April, 2016. It was built to combat large ancient pests / 古代害虫, and features a different kind gameplay as the flower knights board the ship and engage the enemy in the air.

Compared to the Ultimate Missions, whaleship missions have more requirements to clear. A combination of strong equipment, high level knights, and proper composition is required to raise enough overall power to complete the missions.

When the whaleship maps are open, the icon will have in session / 開催中 overlapped on the icon.

During the aerial combat phase, the whaleship directly engages the ancient pest.

Each side attacks twice per turn, and unique special attacks can trigger depending on the attribute of the whaleship. The attribute of the whaleship is determined by the party composition of the girls within the ship: if 40% of the ship (16 girls) is filled by a certain weapon type, the ship will gain that attribute as well. Damage reduction and critical hits may be applied while defending from attacks. The whaleship and the boss are unaffected by stat changes from flower knight's abilities during the aerial combat phase.

You can occasionally hear Nazuna's battle cry during airship combat. 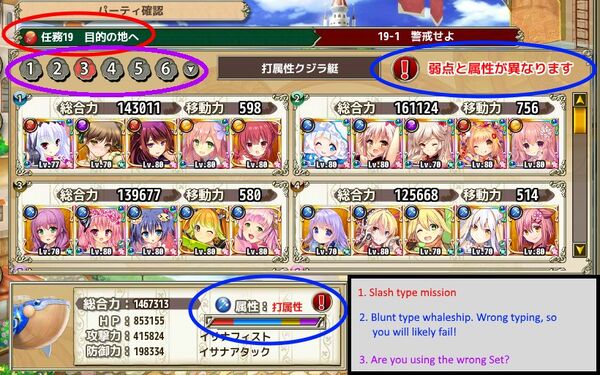 Using the correct attribute for the stage will guarantee that all of your whaleship's attacks will deal weakness damage. The game will warn you with a popup if you attempt a stage using the wrong whaleship attribute. You would lose out on the guaranteed 1.5x weakness bonus on every single attack, so it would likely fail the boss fight anyways.

Flower Cannon / フラワーキャノン is the whaleship's 3rd skill added on Nov 20, 2017. The more characters you have in your composition that match the whaleship's typing, the higher chance you have of this skill activating. It will randomly take one of the characters of the correct typing, and use their Attack Power to deal damage to all enemies. Although the whaleship acts twice per turn, this skill can only activate once per turn. For a general purpose-typed whaleship, the activation rate is solely based on the number of characters you have in the composition.

Whale Cannon / ホェイルカノン is the attack you can use in place of Solar Drive. As of August 30, 2016's maintenance, it's power is multiplied by the number of remaining flower knights.

Whale Protection is an ability the whaleship got on Nov 20, 2017. It sometimes activates when the whaleship defends. It will take 1~3 characters from your composition and use their Defense Power to further reduce damage taken. There are three levels to this ability. The level determines how many characters are used. Levels two and three activate more often if you have more characters of the correct typing in the composition. For a general purpose-typed whaleship, levels two and three activate more often just by having more characters in the composition.

Five random flower knights from your composition and your helper's party will appear in the crystal room. Flower knights that fainted in deck combat won't go to this fight. Flower knights higher up in the composition have a better chance of appearing, so careful composition of your topmost teams can be helpful. The fight lasts one turn, but everyone has a 100% skill activation rate. Solar Drive can't be used in this fight.

After reaching a set amount of damage for the first couple times, the Ancient Pest will flee, leaving behind a number of small enemies behind that will board the airship to attack your girls. These fights are almost identical to normal combat, but should your main party be defeated, your next party will automatically be swapped in. Your airship will be weakened if some of your knights are defeated, and losing all your parties will end the mission in failure.

The Chance panel was introduced on August 30th, 2016. The panel forces you into a fight. When the fight ends, the whaleship's attack power gets a boost based on the number of remaining teams (not flower knights). The attack boost is 40% if all teams survive, but you will lose 5% attack power for each team that didn't survive.

From Mission 17 onwards, the player starts with a Swanship / スワン艇 which can be dragged to one of the starting hangars in the map. While aboard the Swanship, encountered pests will be fought as Deck battles. Any defeated flower knights will no longer contribute to the overall stats of the Whaleship. The Swanship will revert into a Whaleship once it had passed through the lighthouse.

The purpose of Swanship is that players can opt to go after the Ancient Pest immediately for a fast kill (and fast rewards) with a fully powered Whaleship, or players could attempt to defeat the the pests through Deck battles and aim for a full clear.

Making your whaleship have the same attribute as the map you are attempting will greatly increase your effectiveness because you will get the 1.5x damage multiplier for hitting the weak point of the Ancient Pest. Composing a good set out of 40 flower knights is vital to clearing whaleship maps.

There are at least three ways to make a proper set.

This is for set creation type one. This section details how to properly make a set using a Magic whaleship as an example. Party 1 plays a significant role in whaleship missions because it should ideally wipe out every single pest along the way, so the following example also demonstrates how to put your preferred flower knights into the first party.

A nameless panel was introduced on September 26th, 2016 along with chapter 1, mission 7. This panel makes the whaleship take a different path based on its overall force disincluding any force contributed by your helper. It first shows up in chapter 1, mission 7-5 where it routes stronger whaleships to a more rewarding route than weaker ones.

Retrieved from "https://flowerknight.fandom.com/wiki/Whaleship?oldid=82440"
Community content is available under CC-BY-SA unless otherwise noted.